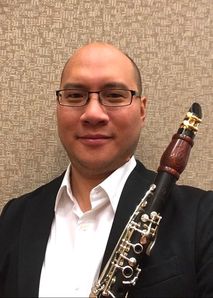 Gene Wie (Symphony Orchestra Director) appears internationally as a conductor, chamber musician, and educator, dividing his time equally between the classroom and concert stage. His performances on violin, viola, clarinet, and saxophone have taken him across the United States, Canada, Europe, and the South Pacific, into major venues like the Sydney Opera House (Australia), the Moulin d'Ande (France), Salzburg Mozartaeum (Austria), and Prague Leichteinstein Palace (Czech Republic). He currently serves as Principal Conductor of the California Solisti Chamber Orchestra.
​
Since 2005 he has served as Music Director of the Community Youth Orchestra of Southern California (CYOSC), a non-profit performing arts education organization founded in 1990 that provides orchestral training, performances, and community service opportunities for K-12 and college students throughout the Southern California region. Working entirely as a volunteer, he annually assembles a superb coaching staff, mentors aspiring teachers/conductors, introduces students to a vast repertory of both traditional classical as well as new works, and leads the orchestras in four major concert cycles each season.

Beginning in August 2020, Gene is the new Director of Orchestras at Choate Rosemary Hall in Wallingford, Connecticut, USA, where he will conduct the Symphony and String Orchestras, coach Chamber Music, and teach Music History. In June 2020 he concludes a fourteen-year tenure as Director of the Orchestra Program at St. Margaret's Episcopal School in San Juan Capistrano, California, USA, where he oversaw a comprehensive orchestral training program in grades 4-12 that he has continuously developed since joining the faculty in 2006. 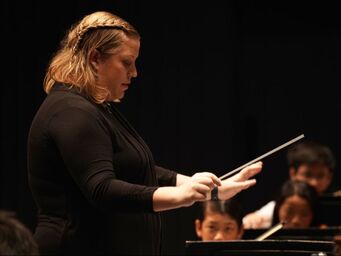 Holly Fischer (Sinfonia Director) has been the Sinfonia director at CYOSC for the past 4 years and is excited to step into her new role as Music Director for CYOSC.  Ms. Fischer has been teaching music in public schools for the past 11 years and is the current music director at Hamilton Middle School in Long Beach, CA.  She has been a long time advocate of Music Education and helped teach students in an El Systema program in Tarija, Bolivia, as well as students at the Afghanistan National Institute of Music in Kabul, during the summers of 2014 and 2015. She also helped create and conduct the first All-State Elementary Orchestra in Connecticut, which is now in its 7th year.  As a bass player she has performed throughout the United States, as well as Germany, England, Afghanistan and Bolivia.  Her work with the Afghanistan National Institute of Music can be seen on the CD: Gulistan-e Nur “The Rosegarden of Light.” 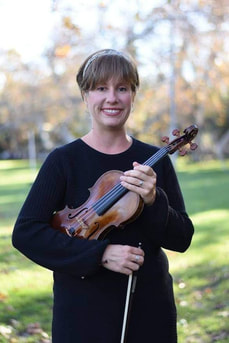 Ms. Miner has a kind and humorous teaching style while motivating every student to do their best.  She focuses on healthy technique, music literacy, historical knowledge, and aural skills training.  She encourages a positive atmosphere for learning, and believes in setting each student up for success according to their goals.  Her students have been inspired to study music at university, perform professionally, and become teachers in their own right. 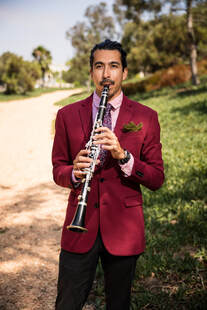 Caesar Martinez is a Woodwind Artist/Educator/Composer based in Seal Beach, CA. Caesar began his Southern California musical career in 2006 upon being accepted to the Bob Cole Conservatory of Music for Woodwind Performance. Since then he has been actively playing/teaching across Southern California and has also had the pleasure of touring internationally with the Ron King Big Band and the Billy Vaughn Orchestra. He enjoys playing locally with many jazz bands including the Elliot Deutsch Big Band, Igor Kogan Big Band, Paul McDonald Big Band, the Dave Richards Big Band and many others. Currently he can be seen playing with his own jazz quartet; The Caesar Martinez Quartet, and at Disneyland with the groups “Mostly Kosher” and the “Swing Cats Big Band”. He also maintains a vibrant teaching studio and conducts annual recitals for students. His students have been accepted to Eastman School of Music, OSCA (Orange County High School of the Arts), have received outstanding soloist awards at Reno Jazz Festival, and have been accepted to various honor groups across Southern California.
​ 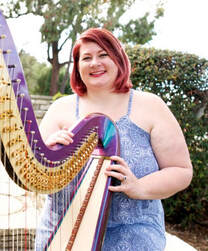 Jillian (Risigari-Gai) Lopez is a proud Los Angeles native and freelance artist.  Jillian earned a Masters in Fine Arts in Harp Performance from California Institute of the Arts and a Bachelor of Music in Performance- Harp from California State University- Long Beach. She is currently pursuing a DMA in Performance at UCLA. Her versatile style has been mentioned by LA Weekly (Hollywood Fringe Festival) where they describe her as “one who reaps musical dividends, adding to the story’s magical feeling” and her musicianship adds “delicious upstage accompaniment” – Stage and Cinema.
Film credits include ‘Papa Hemingway in Cuba’ (2015), and ‘The Ground Beneath Their Feet’ (2014), and ‘With Great Power: The Stan Lee Story’ (2010). She was a featured performing artist for PBS “Artbound Special Episode: Invisible Cities” (2015) composed and adapted by Christopher Cerrone (Pulitzer Prize Finalist), directed by The Industry’s founder and artistic director Yuval Sharon, with choreography by Danielle Agami. She was also featured in pre-recorded tracks on the green route from The Industry’s ‘Hopscotch’ . In the Spring of 2017, Jillian was featured in a A Laugh Than Think Production of ‘For Piano and Harpo’ written and starring Dan Castellaneta (voice of ‘Homer Simpson’).
She is currently Principal Harpist  & Co-Founder of the Los Angeles Chamber Music Co. (LACMC), Long Beach Ballet Company, Pacific Opera Project, Pasadena Opera, and The Contemporary Performance Collective.  She has performed with The Industry Opera Company, Long Beach Symphony Orchestra, and Long Beach Opera.   She has also performed with Grammy Award winning and nominated artists such as Diane Schuur, Melissa Manchester, The Irish Tenors, and the Los Angeles Percussion Quartet. 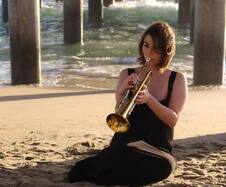 Tatiana Giesler is a classically trained and multifaceted trumpet player who has performed with the Colburn Orchestra, American Youth Symphony, and Debut Chamber Orchestra to name a few. She has had the honor of sharing a stage with well-renowned musicians such as Thomas Hooten, Malcolm McNab, Eric Marienthal, Rebecca Wilt, and Jack Black. Her playing has taken her to London with the CSULB Wind Symphony, as well as Denver and Lexington with the National Trumpet Competition, winning second place for the Small-Ensemble division one year and making the semi-finals in the Graduate Solo division respectively.
​
In addition to her performing, Tatiana has accrued a diverse teaching career. She has taught for a number of years in many different formats including private one-on-one lessons, trumpet sectionals, brass ensembles, brass quintets, and others. She has personal experience teaching a variety of ages from students in elementary school to aspiring high school students and adults. Tatiana completed her Masters degree in Trumpet Performance at the Bob Cole Conservatory of Music, where she served as the Brass Department Graduate Assistant. 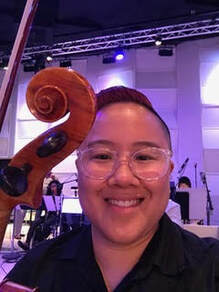 Cindy Luu-Campos, currently finishing her masters in music education at the Bob Cole Conservatory of Music at CSULB, enjoys sharing her love of music. She teaches band, orchestra, and choir at Washington Middle School and is the co-conductor of the Moncayo Orchestra for Harmony Project, Long Beach. She is also the SCSBOA elementary viola section coach.

In her performing career, she has subbed with the Los Angeles Philharmonic and Pacific Symphony orchestras. She has been the viola section leader for the Southern California Philharmonic. Viola playing has lead to recording sessions for independent film scores, video game scores, and indie records. Cindy has performed outside of the classical realm with MILCK and other Southern California based artists. 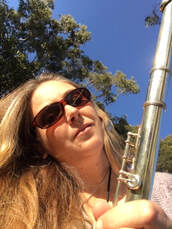 April Chocholaty has been a private woodwinds teacher in the Southern California area for more than 25 years, teaching flute, oboe and saxophone. She has taught music appreciation at Dehesa Charter School and Music Practices, Chamber Music and Symphonic Band Woodwinds at Orange County School of the Arts. Mrs. Chocholaty currently teachers at Christ Lutheran Middle School and an accelerated 4/5 th grade instrumental music class at St. Margaret’s Episcopal School. She is also the winds coach for Community Youth Orchestra of Southern California, St. Margaret’s Episcopal School, Orange High School, Santiago Middle School, Portola Middle School and Santa Margarita Catholic High School. April has performed for a number of ensembles throughout Southern California; including the Cypress Pops Orchestra and the Pacific Symphony Institute Orchestra, Southern California Philharmonic Orchestra (past principal oboe), and Praise Symphony Orchestra (past principal oboe), and is currently principle flute for Soloisti. She is a member of the Bosendorfer Consort, playing chamber music throughout southern California. April and harpist, Linda-Rose Hembreiker play together as the ChocholatyRose Duo, in a concert series “The Musical StoryBook”. She plays regularly in musicals throughout the Orange County area. In 2013 and 2015, she toured with Global Missions Project, Celebration Orchestra to Cuba. In 2005, April had the opportunity to visit Catharine DeRenzis, a flute teacher friend, in Belize and present a masterclass and teach students there in Belize. She is a member of National Flute Association, Music Teacher’s Association of California, Los Angeles Flute Guild, and Southern California School Band and Orchestra Association.